The dream car. The car that when it passes us on the road, we do a double-take and stare after it longingly. The one that when we see it in a parking lot, we peer through the window to see how clean the owner keeps the interior, how many miles are on the odometer. When a dream car finally becomes attainable, when you can actually smell the leather and hear the exhaust note in your sleep, those are the best kinds of dream cars. For my good friend Dave, he was able to make this dream come true. This is his story.

For Dave, his dream car has always needed to contain a few key ingredients: performance, affordability, and a dash of outrageousness. This has lead him on a multi-year quest for the perfect car. Contenders included the Volkswagen GTI, R32, Audi S4, Honda Civic Si, the Mazdaspeed 6, and even a Cadillac CTS-V. “I flip-flopped every single day,” said Dave. His current vehicle is a 2004 Volkswagen Passat 1.8T 4Motion, and while comfortable and reasonably sporty, it has never quite fit the bill. “The [Passat] is a little too forty-year old father, and I was looking for something younger.”

On a recent trip to a Subaru dealership, he had the opportunity to drive a 2007 Subaru Impreza STi, and he immediately knew he was on the right track. “I knew that was the type of raw power I was looking for,” said Dave. His search landed him on the pages of Autotrader.com and to a black 2009 Subaru WRX five-door with only 14,000 miles through a dealership in Cleveland, Ohio. He arranged with the dealer to trade-in the Passat, and without having seen the WRX, Dave went ahead and bought it.

“I’ve been tweaking out the last two week because buying a car, sight unseen, and trying to handle paperwork from credit unions and dealerships… [it] has been a logistical nightmare,” said Dave. After factoring the trade-in value of the Passat, the price for the WRX dropped to just $14,500.

I got the call from Dave a few weeks ago, asking me if I wanted to join him on an adventure from his hometown in New York out to Loganton, PA, a small town in rural Pennsylvania. The plan was to drive four hours west to Loganton and meet the dealer halfway. There, they would swap cars and we would motor back in the WRX. I factored in the four hour drive it would take me just to get from my house to Dave’s. “I’ll be there,” I told him.

I arrive at Dave’s house late on Friday night and immediately crash on the bedroom floor. The next morning arrives bright but overcast, and Dave and I mow down a few muffins for breakfast then head straight to the garage to clean up the Passat. The shop-vac roars and the Windex squeaks the windows clean. Dave opens the garage door into the muted morning sunshine and says, “Let’s roll.”

The drive out is a beautiful one. We cruise through New York’s quaint rural towns and scenic interstate and into northern Pennsylvania. The trip is a flurry of beef jerky, energy drinks, and Queen’s “Bohemian Rhapsody”. When we’re about fifteen minutes from Loganton, Dave begins checking his watch every minute. The closer we get to Loganton, the more we realize this could either epically awesome or an epically expensive failure. Would the dealer even show? What shape was the WRX really in?

The questions were ringing loudly in our heads as we pull into a small Valero gas station where we were to meet. A quick scan of the parking lot shows that we’ve arrived first. Dave parks the Passat and just as I get out, I hear the unmistakable sound of a turbocharged Subaru boxer engine. The WRX navigates the steep entrance to the gas station and Dave and I literally run across the parking lot as the driver pulls towards us. One thing is immediately apparent; that is no stock exhaust system. A low thrumming resonates from the back of the car and we both catch a glimpse of a fat SPT axle-back exhaust poking out from the rear diffuser.

Pete and his wife Lori emerge from the car. Pete is a retired car salesman and both he and Lori are in their early seventies, complete with canes and hearing aids. They look slightly comical climbing out the low-slung WRX and would look much more at home in a car like the Passat. Pete laughs easily and tells us, “This thing is quick. It’ll do all of a 160 mph, so be careful.” 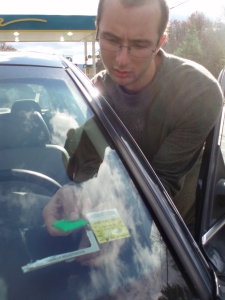 We swap license plates and throw our gear into the WRX, and then it’s time to drive. Dave is reserved and contains his excitement, trying to stay as logical and as measured as possible, while I jump up and down and fist pump like I’m on Jersey Shore. I think Dave is waiting for the bottom to fall out of this whole plan and find out something is totally wrong with the car. But we take off down the road and that thought quickly evaporates. As we hammer onto an onramp to the muted whoosh of the WRX’s turbo, I think about what Dave said when asked what he was most excited about. “I’m really excited for the first onramp; I think it’s going to be ridiculous.” And it is.

After taking the scenic route back, we explore the back roads of Dave’s hometown and the limits of the WRX’s performance. It sticks like glue and accelerates hard out of corners. I sit in the passenger seat firmly gripping the oh-shit-handle, as Dave mentally measures the actual performance of the car against the image he has in his head. Numbers and horsepower figures and parts totals explode through Dave’s mind like gasoline in a high compression engine. “This car is awesome,” is uttered more in one day than I think I’ve ever heard in my life.

While the performance of the WRX is lightyears beyond his Passat, I know Dave is already thinking of ways to take his dream car to the next level. He is reveling in the performance as we shred the back roads, but I know his sights will soon rise to new heights. “I think you can achieve great things by tuning … Having 300 wheel horsepower would be a good mark for doing all the nonsense I hope to do.” 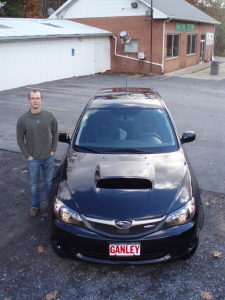 When we pull into the garage at the end of the day, Dave lets the engine run for a minute to give the turbo time to cool. We sit in the car, not saying anything as the SPT exhaust whump-whump-whumps in the enclosed space. Dave kills the engine and we step out to the ticking of cooling metal. The WRX looks like a spaceship against the bare white walls of the garage, and Dave smiles in approval. It’s been a good day.

5 thoughts on “What Turbo’d Dreams May Come”