When championship winning motorcycle racer Scott Greenwood of Dunbarton, New Hampshire talks about racing, his eyes light up. He speaks excitedly, he relishes in the telling of every detail, and you can tell he has no shortage of enthusiasm and passion for what he does.

Engines, racing, and speed run in Greenwood’s family. He grew up in the Manchester area and began his riding career on dirtbikes. His brother Bill began road racing in 1989, and was the one responsible for getting Greenwood involved on the sport. In 1999, his oldest brother Dale also started road racing along with his nephew Marshall, and way back in the day, Greenwood’s father was actually a NH State Go Kart Champion and did a bit of regional and national kart racing in the 1960’s.

Greenwood’s first motorcycle was a 1987 Honda Hurricane CBR600. “My brother bought it as a parts bike; it had been in a street bike crash and the front end was bent so bad the front wheel hit and broke the motor.” With help,Greenwood got the bike back into riding condition and rode it from his home in Manchester to Freedom Cycle in Concord where he was working at the time. When the weekends rolled around, off came the motorcycle’s lights, and it was turned into a weekend race bike.

Having a supportive family is an important element when pursuing a passion full bore, and Greenwood is fortunate to have just that. His wife Heidi, fifteen-year-old daughter Kelsie, and his thirteen-year-old son Samuel travel to Scott’s races as often as possible, and Samuel is actually turning into a promising rider himself. It’s easy to see that motorcycles and racing are a part of the Greenwood family, just like they were when Scott was growing up, and the whole family are all engaged and involved in helping this dream grow and be successful.

Greenwood’s home track is the New Hampshire Motor Speedway in Loudon, NH. (A little fun fact, Greenwood is second on the all-time list of most championships won in the track’s history with 38.) NHMS is also home to the Penguin Racing School where Greenwood has been an instructor since 2010. He brings his substantial racing knowledge to the Track Experience program offered by the Penguin school and he helps riders of all levels get their first taste of track riding.

“It has been very rewarding, and it’s refreshed my attitude about racing. Seeing a new guy start out and get hooked is exciting. People who take the school are always smiling when they leave.” Riders of all levels learn body position, what their motorcycle is capable of, fundamentals in a classroom setting, how to read the different flags and corner worker signals, etc. Be sure to check out the Penguin school’s websiteand learn about all their classes, track days, and other events.

How would you describe what’s it like racing a motorcycle?

“Adrenaline! It’s more mental than physical, it’s very much a mental sport… It takes a lot of mental strength and bravery. In order to get better, you have to scare yourself and make that your new comfort level.”

What do you like best about what you do?

What makes racing in NH different than racing in other states/tracks? Is there anything that makes NH riders different?

“The [Loudon Road Race Series] is similar to other clubs across the country. There is a good sense of community and sportsmanship, lots of willing people to help out another rider in need. There are many stories of guys getting hurt and neighbors and friends from the pits helping out to pack up that riders stuff or help repair a motorcycle so they can continue racing or loan parts, etc. Also, whenever we have had fundraisers for seriously injured riders… the LRRS racers have always stepped up to the plate. From having auctions to 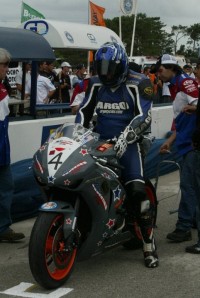 raise money for guys or their families – buying the stuff or donating items.” 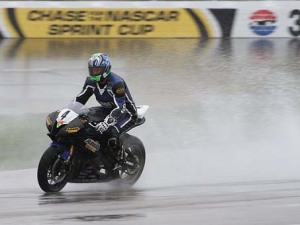 Definitely one of the most unique experiences of Greenwood’s career is when he had the opportunity to participate in a race in Uruguay in December of 2010. The following quote was taken from an Argo Cycles press release before Greenwood headed down to the race. The press release can be found on RoadRacingWorld.com. While you’re there, be sure to check out the other articles on Greenwood’s victorious racing exploits.

“This was a very rare opportunity that I could not resist. Back in October, the owner of Argo Cycles asked if I would be interested in racing this event in his home country of Uruguay. We put together a shipment of parts to use…Miguel Orpi, a long-time customer and friend of Argo’s has assembled a nice racebike for me to use… National Championship rider[s] from Argentina, Brazil and also racers from Uruguay will be in attendance. It looks to be an exciting event for the fans of Superbike Racing in Uruguay. It was an epic event and Greenwood ended up taking first place in the Superbike Elite class, and placing second overall.

In an email response, Greenwood talked about the reaction of the crowd to his victory. “The guy that loaned his street bike to the effort jumped the fence and met me on the back straight-away. I stopped next to him and did a big burnout to celebrate, and he was bawling! Tears squirting out of his eyes type of crying… The whole crew… met me on pit lane and surrounded me and were hugging me and crying. It was very exciting for them to be involved and to win was unbelievable for them. Just a year before they watched the race from the fence as a spectator and now they were not only involved, but were a big part of the show.”

Greenwood was something of a celebrity when he was down there. His name appeared on posters, he was asked to do a radio and a TV interview for media from Uraguay and neighboring Argentina, and the South American President of the FIM (a world level sanctioning body for racing) commented on the significance and importance of his involvement in the race.

What was your most memorable race?

“Daytona Formula USA National Series Race [in the Pro 600 Sportbike class.] I qualified on the front row, and got the holeshot and lead from start to finish. The pack of riders behind me started battling from the first lap and with all the passing and re-passing they were
slowing each other down and my quick start allowed me to break away from the pack and check out on them. I won by a couple of seconds and we were all on the similar 2003 Yamaha R6 motorcycles. I was 1 or 2 points behind in the Championship (I was in 3rd) going into the final round… the top 3 [were] separated by 3 points. It was truly a winner take all.”

Greenwood doesn’t actually do a lot of street riding. There are hazards that even racetracks don’t have: Old ladies turning into the street without looking, people not paying attention when switching lanes, among others. For him, racing is the ultimate motorcycle experience. And, even after all these years, he’s still hooked on the sport. “[Racing] draws people in for long periods of time. It makes them lifers. They fall in love with the sport and race for a long time.”

What does a race motorcycle look like? Greenwood’s current machine, a 2008 Yamaha YZF-R6, is built to Supersport specifications. Here is the list of the modifications done to the bike:

– Billet aluminum engine cover with removable sliders (The aluminum cover prevents oil from spilling out after a slide.)