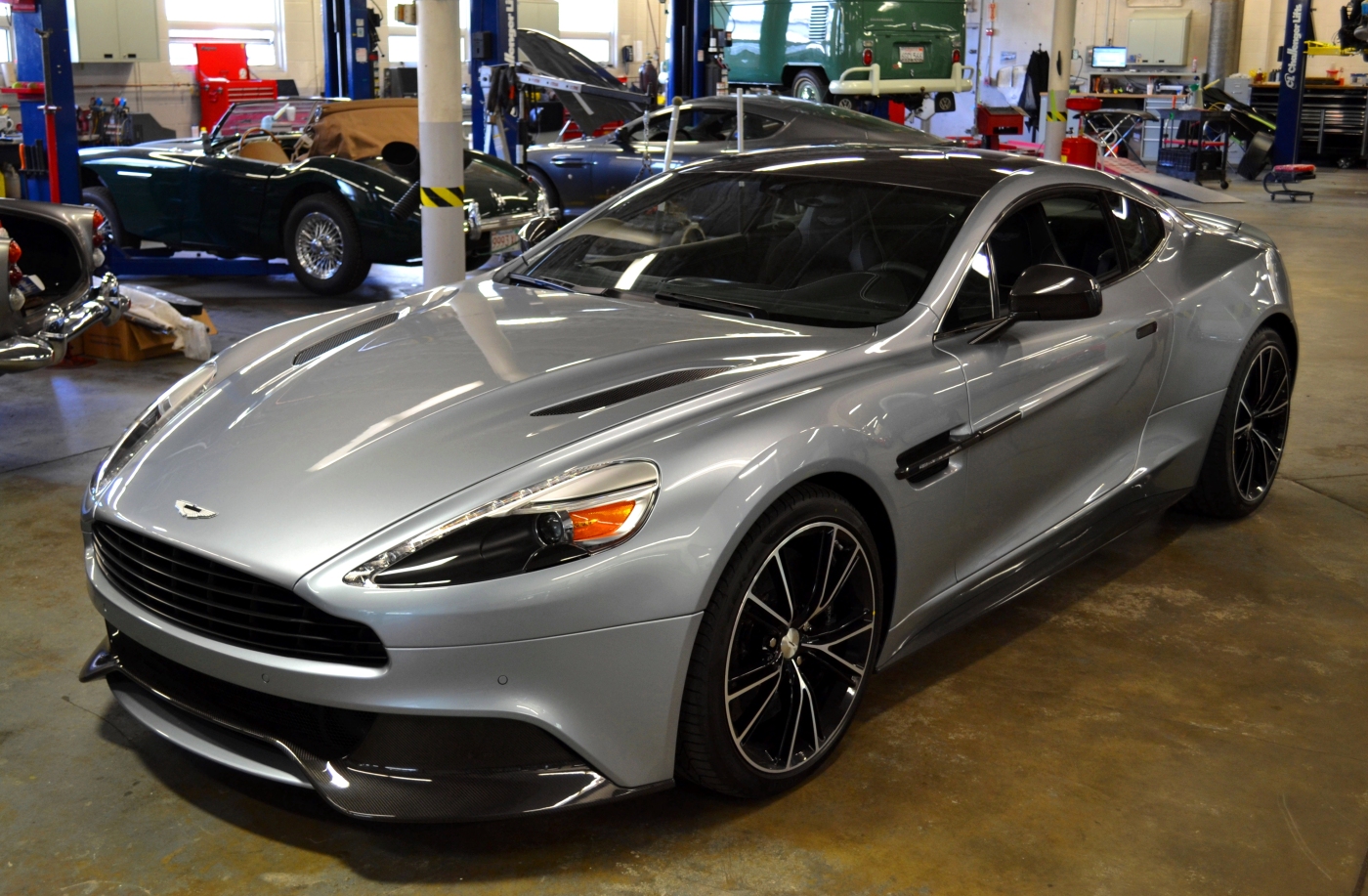 I’m quite certain everyone already knows this, but the new Aston Martin Vanquish is great. Through some mysterious combination of luck and knowing the right people at Aston Martin of New England in Waltham, Massachusetts, I was lucky enough to drive one recently. After spending some time behind the wheel, it became clear that the Vanquish is like most modern supercars—an object of intense and oftentimes irrational desire/a supremely effective instrument for redefining perceptions—and a worthy successor to Aston’s venerable DBS. Really, the only negative with the whole thing is that I don’t yet have the $300,000+ to buy one.. 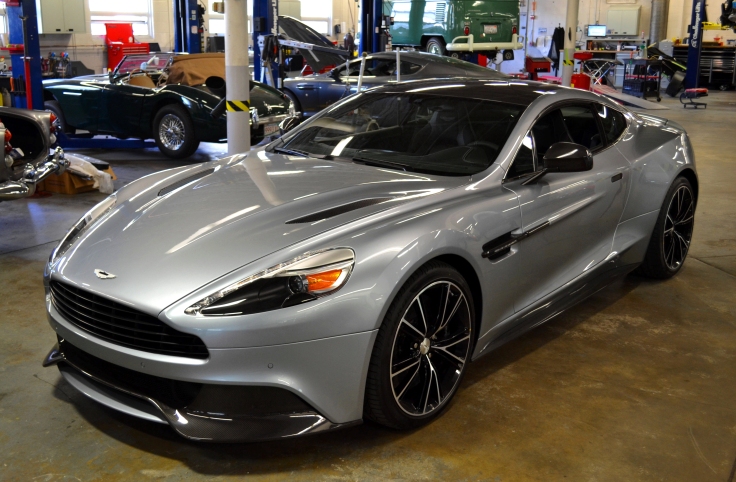 Visually, the Vanquish is a study in lines—vivid, sensual lines that appear to have been coaxed from carbon fiber to coalesce into a scintillating whole. Much of the Vanquish’s visual panache is derived from elements originally seen on the One-77, Aston’s multi-million dollar hypercar. Look deeper, and the Vanquish continues the visual feast—twin lines that track up the hood and echo and reverse on the roof, the flared rocker panels, the character line that runs from the top of the headlights, over those stunning hips, and around to the integrated rear wing. I even like the carbon fiber mustache-thing below the grille. This is a gorgeous car.. 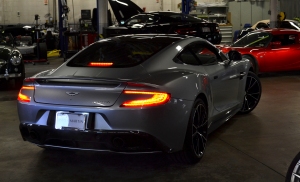 Aston Martins have always been a different breed, preferring to arrive at the party in an impeccably tailored suit over a sleeveless tee and Ray-Bans (*cough* Lamborghini Aventador *cough*). Beneath the Vanquish’s beautiful exterior resides Aston Martin’s Generation 4 VH architecture which, in conjunction with an extensive use of lightweight materials, means the Vanquish is both stiffer and lighter than Aston’s previous halo car, the DBS. And, while the two cars share the same basic engine—a 6.0-liter V-12—in Vanquish-guise, the V-12 mill makes 565 horsepower (up from 510 in the DBS) and 457 pound-feet of torque (up from 420 pound-feet). Putting that power to the ground is a six-speed automatic transmission with column mounted paddles. The increased grunt means the dash to 60 miles per hour is politely dispensed with in about four seconds, and this English gentleman will keep on hustling to 183 miles per hour.

Aston Martin again turned to the One-77 for inspiration for the Vanquish’s interior: the sweeping central stack with touchscreen controls and curvaceous dashboard all hearken to Aston’s flagship. While attractive, the cabin is far from perfect—the rear seats are comically tiny, the buttons on the dash can be difficult to see, and the pop-up navigation system looks like an early ’90s Garmin GPS. The display looked genuinely antiquated and spoils the otherwise gorgeous center stack. I found it best to just leave it off and tucked away. Those things aside, the end result is still a beautifully bespoke cabin from which to command the miles. And hey, if you don’t like the ridiculous rear seats, they are an optional delete.

But enough of that, it’s time to drive. I slid the crystal key fob into a slot on the center stack and the big V-12 ignited with a bark which slowly settled into a delicious, brassy throb. I was curious to see what the Vanquish would be like at low speeds and in traffic on the route I was taking, and it was soon clear after a few minutes in rush hour mayhem that it was no harder to drive than your grandmother’s LeSabre. Hit the button marked “D” on the dash to keep the transmission in automatic and the suspension and engine mapping in their most vanilla settings, and the big Aston easily becomes a willing commuter companion. 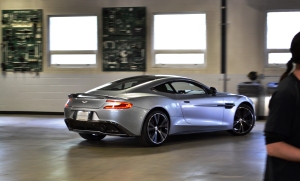 But, to stunt the Vanquish’s abilities to grocery-gettting and sitting in traffic should be up for consideration as a criminal offense. The car’s real place is outside of downtown, where the traffic disappears and stretches of open pavement unfurl invitingly. The red mist descended. I switched things into Sport mode, knocked down a few gears, and let the engine hover anxiously near 4000 rpm. The engine strained and yowled in a gritty baritone. Cue Han Solo and Chewbacca trying to outrun Imperial Star Destroyers and make the jump to lightspeed: Punch it.

With the throttle buried, the Vanquish pulled like a fully stoked locomotive and ignited primal areas in my brain I didn’t even know existed. The suburban areas in southern Massachusetts were no place to fully exploit the Vanquish, but after a few rips up to, ahem, vigorous speeds, it was clear the car’s breadth of talent is deep and intoxicating. Like any great power, the Vanquish’s was absolutely addicting—the way it piled on speed, all I wanted was to do pin the throttle at everything that even resembled a straightaway. And if the power was addicting, what about the sound? It would be easy to get all misty-eyed and let my language go purple trying to convey what it was like, but trust me when I say it is something you simply need to experience. Aston Martin reportedly made an effort to insulate the cabin from outside noise, but (thankfully) they utterly failed at keeping the V-12 bellow from penetrating all the way to your core.

The steering is well weighted and precise, and the slightly squared off steering wheel felt strong and confident in hand. Toggling between the different suspension and power delivery settings produced a noticeable difference in the way the Vanquish drove. Sport mode felt crisp and responsive and produced the biggest grins. There was a reassuring sense of solidity in the way the Vanquish carved up winding back roads and remained composed over rough pavement. When it came time to slow things up, the carbon ceramic brakes firmly hauled the Vanquish’s portly 3800 pounds down from speed. This car was made for effortlessly loping across the miles in serene comfort, with that glorious V-12 ever willing and ready to hunt down the horizon.

After a long drive, gently guiding the Vanquish back into it’s parking spot at the dealership was about the last thing on earth I wanted to be doing. With a seemingly endless reserve of power on tap and character and personality in spades, the Vanquish is one special car. What the Aston Martin has manage to accomplish with this car is twofold: while it isn’t as dynamically superior as the Ferrari F12 or all-conqueringly powerful like the Bentley Continental GT Speed, it asserts itself in the marketplace as a tremendously capable and heartstoppingly lovely grand tourer that maintains the elegance and charisma inherent in Aston Martin DNA. It also takes the family halo car crown previously worn by the DBS and adds a few more precious stones. Now, about that $300,000… 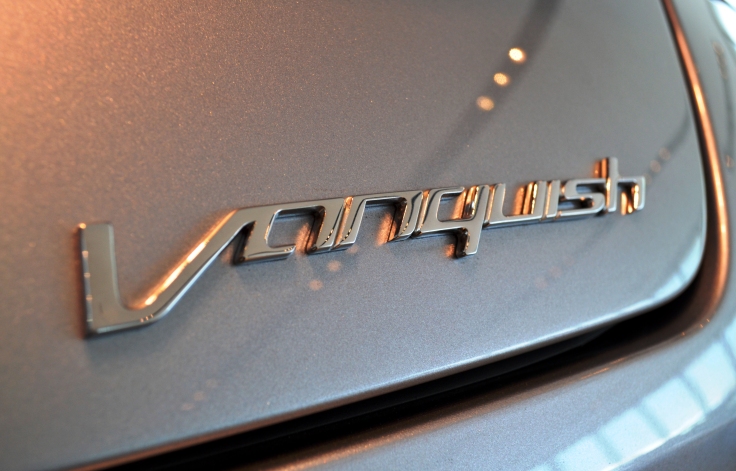 – Opportunities to drive cars like the Vanquish are special ones. Many thanks and much respect to Steve Oldford and Matt Nolan at Aston Martin of New England for the chance to review this car. Be sure to check out AMNE’s website at www.AstonMartin-Lotus.com and ‘Like’ the Facebook page.